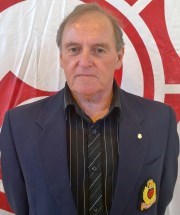 He has been the President of the Jyoshinmon organisation in New Zealand since 1990. He started with Jyoshinmon in 1971 and gained his Shodan in 1981. Subsequent grades with Nidan in 1984, Sandan in 1986, Yondan in 2000, and Godan in 2012. Unlike other karate styles, there are only 6 Dan levels in Joshinmon Shorin-Ryu.

David first visited Japan in 1986 and this was followed by many more visits with the previous trip in 2014 for the 45th Jyoshinmon Anniversary Festival held in Tokyo.

David was married in 1970. His wife Sensei Beaty started training in 1975. Their son Sensei Chris was born in 1979 and is one of the club’s Sensei and has been one of New Zealand’s top competitors.